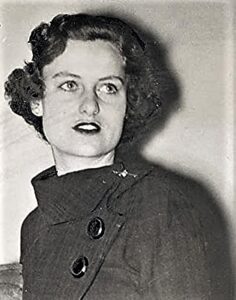 Thomas’s father was a close associate of George Westinghouse, the founder of Westinghouse Electric. Thomas’s mother was an heiress of Pittsburgh’s oldest manufacturing families, making a fortune from glass and hardware.

Gertrude and Thomas divorced in 1918. She remarried Peter Jay. a farmer and horse breeder, for more than fifty years. Mr. Jay bred thoroughbred horses and raised beef cattle at a 250-acre farm.

Born and raised in New York City, Mr. Jay was a 1932 graduate of Groton School in Groton, Mass., and earned his bachelor's degree in 1936 from Harvard College, where he had played on the polo team.

Gertrude, the last surviving child of Liberty and Delia Holden, died September 27, 1967, at her home in Milton, Massachusetts. She was buried in Lake View Cemetery.